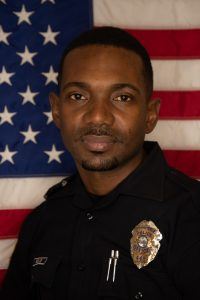 On August 29, 2018, a suspect, armed with a kitchen knife, entered the victim’s apartment. As the suspect attempted to make his way through the dark bedroom, he bumped into a table, knocking a vase onto the bedroom floor. The victim was awakened by the loud noise and turned on the bedroom lights. With the lights turned on, the suspect attempted to conceal himself near the footboard of the bed.

In fear for her life, the victim quickly armed herself with a baseball bat near the bed and yelled at the suspect to get out of her apartment. The suspect fled the victim’s apartment using the front door. The victim dialed 911 and provided a very detailed physical and clothing description of the suspect. Officer Omar Rolle immediately responded to the area to assist the victim and attempted to locate the dangerous armed suspect. Officer Rolle was searching the nearby residential area when he noticed a suspect matching the description provided. He immediately stopped and detained the suspect.

Officer Rolle requested back-up units to respond to his location. The suspect was searched for weapons; during the search, officers found a large kitchen knife concealed in the suspect’s pants. A records check of the suspect revealed he was on probation and had been arrested over 20 times for violent crimes such as armed robbery, armed burglary, and resisting arrest. The suspect was positively identified by the victim during a line-up and was arrested by Officer Rolle on the scene. The suspect was charged with armed occupied burglary.

Officer Rolle’s training, alertness, intuition, and dedication to duty resulted in the arrest of this armed and dangerous suspect, and the recovery of a weapon. Most importantly, Officer Rolle likely prevented this suspect from victimizing someone else.