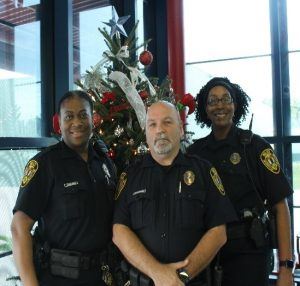 On October 30, 2018, Officers Stacina Jones, Pinkey Joachim, and Niel Johnson, responded to an emergency call, reference a male armed with a flare gun acting in an aggressive manner. In addition, the caller advised that the son of the male was armed with his personal firearm. The units arrived and observed a male standing in the front doorway holding an orange flare gun in his right hand.  The officers made several attempts to convince the male to come outside of the residence and to put the flare gun down. The male refused to comply and retreated into the residence.

Working in unison, the officers simultaneously sprang into action. Officers Jones and Johnson immediately began utilizing de-escalation techniques to calm the male, while placing themselves in a strategic position. At the same time, Officer Joachim addressed the son, immediately conducting a pat-down to determine if he was armed. The son was deemed safe, as he had secured his firearm prior to police arrival. The male became very agitated and attempted to enter his bedroom and close his bedroom door. Officer Jones sprang into action and pushed open the bedroom door grabbing the male by his coat, and removing him from the bedroom. Officer Johnson simultaneously removed the flare gun from his hand and the male was placed on the sofa in the living room.  During a pat-down, a second flare gun was found in the male’s front left pocket. The officers were able to safely secure the male and the two loaded flare guns, while Officer Joachim kept the son calm.

Further investigation revealed the male had a history of mental illness and was not taking his medication. The son advised he arrived home from work and found his father, inside of the residence, walking around with the flare gun in his hands. The son explained his father seemed agitated and was acting in a very aggressive manner toward him. During a previous encounter, his father had shot a flare gun at police officers. Fearing for his safety, the son had armed himself with his personal firearm. The male was transported to the hospital for evaluation and the two flare guns were impounded.

As a result of Officers Jones, Joachim and Johnson’s swift response and cohesive tactical approach, the male was safely taken into custody, disarmed, and transported to a mental health facility to receive the vital medical treatment he needed.

These officers should be commended for their ability to quickly assess the situation at hand while instilling the Department’s values. They safely defused a potentially dangerous situation, with a mentally ill person, without the use of deadly force. They demonstrated professionalism and empathy while safely resolving the situation.