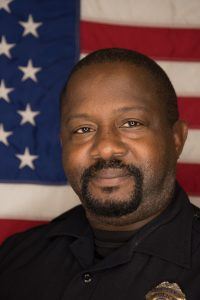 On November 21, 2018, a suspect entered the 7-Eleven, greeted the store clerk and proceeded to the soda station. In an effort to lull the clerk into a false sense of security, the suspect, nonchalantly made himself a beverage. Without warning, the suspect swiftly proceeded behind the counter armed with a machete, ambushing the clerk. He cornered the victim and demanded the money. Shocked and in fear for her life, the victim complied and gave the suspect $150.00 from the cash register, her purse, and cell phone. The suspect exited the store and fled the area in a vehicle.

The following day, during his tour of duty, Officer Jodlyn Antoine responded to the 7-Eleven to check on the employees and to assure them that officers were aware of the incident and were actively searching for the violent suspect. Officer Antoine took this opportunity to view the video surveillance of the incident. In doing so, he ascertained the same individual had committed a previous theft at the same 7-Eleven. Officer Antoine recalled another armed robbery that occurred at a nearby gas station; that suspect matched the description of the 7-Eleven robber.

The criminal investigation was kicked into high gear with the information obtained by Officer Antoine. The detectives matched the suspect from the video surveillance with one of the names provided to them by Officer Antoine. The suspect was positively identified by the victim as having committed the armed robbery. He was subsequently located, apprehended, and charged with multiple counts of Armed Robbery with a Deadly Weapon.

After thirteen years of service to the City of North Miami, Officer Antoine remains motivated, diligent, attentive to details, and eager to serve and protect its residents. He continues to provide quality police work. Had it not been for Officer Antoine’s initiative to go above and beyond a violent felon could still be at large, terrorizing our community. Officer Antoine’s exceptional work generated vital information which led to the closure of this case.