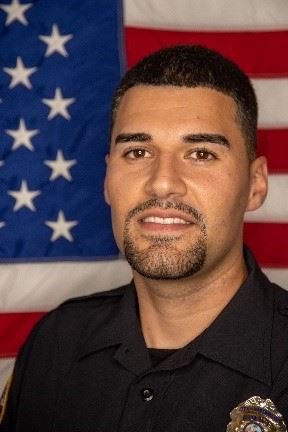 Officer Revilla responded to a call for service in reference to a domestic battery. While on the scene of the domestic battery, he observed a white male who matched the description of a subject on a "Need to Identify" flyer. The subject was wanted for criminal mischief to a business, Café Crème, which occurred on October 1st, 2021. Officer Revilla observed the subject wearing the same clothing and distinctive backpack as the subject on the flyer. Officer Revilla took the subject into custody and transported him to the station, where Detective Frederick questioned him, obtained a confession, and ultimately placed him under arrest.

On November 15th, 2021, Officer Revilla was dispatched to a call for service in reference to assisting a disabled vehicle. While on the scene, a second vehicle drove up to the scene to assist. Officer Revilla quickly recognized the second vehicle as a vehicle he saw on a "Need to Identify" flyer for a subject who had committed multiple mail-box thefts. In addition, the driver of the vehicle was wearing clothes that matched the clothing description of the subject in the flyer. Once the disabled vehicle was removed from the roadway, Officer Revilla conducted a records check of the subject, which revealed there was a warrant for his arrest. The subject was subsequently arrested and taken to the station to be questioned by Detective Dolly. The subject was then charged with six (6) counts of theft and one (1) count of resisting arrest without violence.

I am proud to recognize Officer Revilla's professionalism, attention to detail, and awareness during these incidents. Professionalism is a core value of the North Miami Police Department, and Officer Revilla embodies this value while "Making a Positive Impact" in our community. He was very attentive to current crime trends and criminal intelligence published on the Department's "Need to Identify" flyers. Not only did he attentively and consistently review the various flyers, but paired that review with his keen eye for detail and was able to apprehend multiple subjects who had committed an array of crimes impacting the citizens of North Miami.