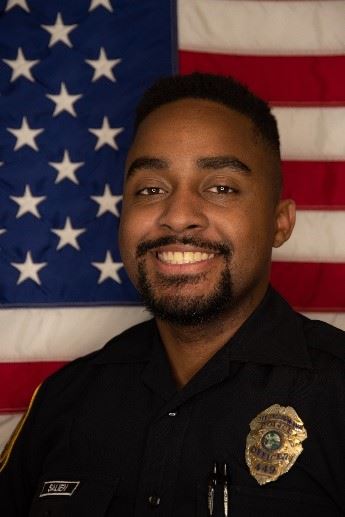 During the month of February 2021, Detective Salien was assigned two felony cases, involving violence, resulting in injuries, within days of one another.

On February 20, 2021, an occupied burglary with a battery occurred at 910 NW 124 Street. The victims of the crime attended a social gathering the night before, where a verbal dispute ensued between the subjects’ family members and the victims. The following day, three subjects, responded to the victim’s residence and demanded to enter the residence in retaliation.

The subjects began to strike one of the victims with a closed fist several times throughout his body. A second victim was violently attacked and pushed, and a third victim was forcibly slammed onto the ground. One of the subjects was armed with a firearm and pointed the firearm at the victims during the incident.

Detective Salien immediately jumped into action and positively identified all three subjects despite the limited information provided. Through teamwork and communication, he recruited the assistance of the Crime Suppression Unit and provided information to other Detectives that could assist him in locating the subjects. Just three days later, the North Miami Crime Suppression Unit conducted a traffic stop in which two of the subjects were apprehended.

While still working the above felony case, Detective Salien responded to 12000 N Bayshore Drive in reference to a road rage incident. The victim, a 66 year old male, sustained serious injuries to his head after the subject followed the victim to his apartment complex and violently struck him with his own cane, several times.

Detective Salien obtained video surveillance that captured the incident. He determined that the subject frequented Miami Beach, and with the use of investigative databases, he quickly ascertained a possible address for the subject in Miami Beach. Detective Salien immediately responded to Miami Beach where he located the subject and took him into custody. The subject was interviewed and admitted to mercilessly beating the victim.

During the span of just three days, Detective Salien was able to bring quick closure to two violent crimes and bring swift justice to the citizens of North Miami who were unjustly victimized by these despicable acts. Detective Salien’s display of empathy during both investigations, encompasses one of the core values of the North Miami Police Department.