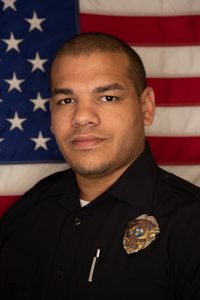 On May 29, 2020, while on routine patrol, Detective Torres conducted a records check on a vehicle’s license plate, which revealed that the plate was not registered to the vehicle. Detective Torres conducted a traffic stop. The driver stated that he purchased the vehicle in January of this year, but did not receive any documentation from the dealership where he bought it. A records check revealed the VIN was not registered to any vehicle. The VIN plates on the vehicle's windshield and door appeared as if they had been tampered with; as they were made of a paper like material that was falling off. A records check of the driver revealed a bench warrant from Ohio. The driver also failed to produce a driver's license. He was immediately detained and placed in the backseat of Detective Torres' police vehicle.

Detective Torres conducted an inventory of the vehicle and discovered a firearm, located in the center console of the vehicle, which he impounded for safekeeping. While Detective Torres was searching the vehicle, he located the maintenance book for the vehicle in the trunk, which indicated another Vehicle Identification Number, for the vehicle. A records check of that VIN in the maintenance book revealed that it was entered as a stolen vehicle by Clifton Township Police Department in New Jersey. Post Miranda, the subject advised that he purchased the vehicle in January 2020 from a dealer located in Palm Beach County. The subject could not provide any documentation for the vehicle because he stated that the dealership provided none.

Detective Torres contacted the Clinton Township Police Department and was advised that the vehicle was reported stolen in February 2020. The subject was arrested for grand theft auto, and the stolen vehicle was recovered. As a result of Detective Torres' attentiveness and investigative skills, this criminal was taken off the streets of North Miami, and a vehicle returned to its rightful owner. I appreciate the alert actions, professionalism, and initiative taken by Detective Torres.