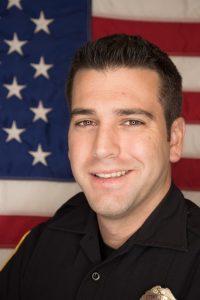 On March 6, 2020, North Miami Police received an anonymous call of a vehicle burglary in progress at the RK Plaza. The caller advised of a white male with a bag, who was wearing a burgundy shirt, was seen entering a red vehicle and also attempting to open several other vehicles by pulling on their door handles. Sergeant Mori, being aware that the RK Plaza area has recently been plagued with numerous vehicle burglaries, immediately took the call. Sergeant Mori quickly responded to the scene and observed a subject, who matched the description given by the dispatcher. Using stealth and sound tactics, Sergeant Mori continued to monitor and provide the subject’s direction of travel over the radio. The subject became aware of the police presence in the area and quickly moved westbound through the shopping plaza parking lot. The subject entered a blue Toyota and attempted to back out of his parking spot. Sergeant Mori’s quick response and radio transmissions enabled a marked unit to take a tactical position behind the subject’s getaway vehicle and thwart his escape. A traffic stop was conducted, and the subject was detained. A records check of the subject revealed that he had a criminal past for theft. While being detained and questioned, the subject vehemently denied entering or burglarizing any vehicles in the area.

A search of the subject’s vehicle revealed several items, including heavy industrial type magnets, which are common tools used by shoplifters to defeat antitheft equipment. The vehicle also contained a shopping bag with unopened kitchen utensils, a black handbag, and an IPad with no receipt. The IPad had a picture of three females depicted on the screen. Using his investigative skills, Sergeant Mori continued questioning the subject regarding the burglary call and the property in the vehicle. The subject stated that the females on the screen were his friends, who were now in Columbia, but the subject could not explain why the IPad was left behind. The subject continued to give inconsistent answers during questioning, but could not dispel Sergeant Mori’s suspicions.

Sergeant Mori’s intuition led him to believe this was the vehicle burglary subject, but he had no witnesses and no victims. The anonymous caller could not be used as a witness to the vehicle burglary as the caller wished to remain anonymous and would not return the area. Sergeant Mori never wavered in his belief and continue to exhaust all investigative means. While at the scene, Sergeant Mori observed three females leaving the Denny’s Restaurant, which shares the parking lot where the subject was located. The females appeared to match the ones on the IPad screen. Officer Mori made contact with the females, who were ultimately confirmed to be the unsuspecting victims of the vehicle burglary. The victims were able to identify and recover their property, which was found in the subject’s vehicle. Sergeant Mori’s instincts and relentless pursuit of justice led to the arrest of the subject for vehicle burglary. Sergeant Mori’s actions made a “Positive Impact”, while keeping the community safe. His dedication is a reflection of his commitment to the Department’s values and mission statement.