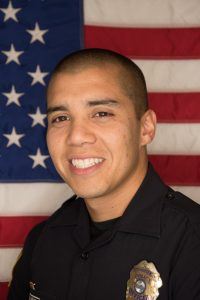 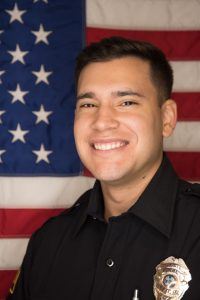 On January 31st, 2020, Officer Brandon Orozco was dispatched in emergency mode in reference to a Hit & Run accident with injuries. Once Officer Orozco arrived on the scene, he was able to calm the injured and frantic victim down and obtain a description and direction of travel for the subject who had fled the scene on foot. Officer Orozco issued a B.O.L.O of the subject in question. While conducting an area canvas, Officer Orozco was able to locate the subject approximately two blocks away. The subject immediately told Officer Orozco, “I have a pistol, I have a pistol,” while concealing his hands in his hooded sweatshirt. Officer Orozco, while holding the subject at gunpoint, maintained his composure and gave loud verbal commands for the subject to show him his hands and for him to get on the ground. Throughout the encounter, the subject continued to conceal his hands and shouted at the officers numerous times, “shoot me, shoot me.” Adhering to the Department’s principle of showing the utmost respect for the Sanctity of Life, Officer Orozco showed great restraint and refrained from using deadly force during this encounter, while simultaneously maintaining a safe distance from the subject.