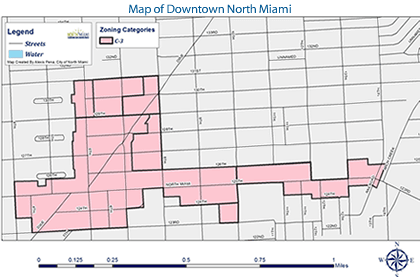 In the Spring of 2012, the City retained Keith and Schnars, P.A, to develop architectural and urban design guidelines for its downtown and major corridor, NE 125 Street, which were subsequently adopted by Mayor and Council as the City’s Downtown Master Development and Major Corridor Plan. The final Master Plan includes a series of recommendations outlining strategies needed to spur redevelopment, promote economic growth and transform the physical image of the City’s Downtown District.

On November 25, 2014 the City adopted an Action Plan and Concept Plan for a portion of the Downtown District. The Action Plan will serve as a guide for prioritizing and budgeting for the implementation of the recommended strategies/capital projects over time. These projects will eventually be incorporated into the City’s Capital Improvement Plan in order to tie the recommended capital projects for the downtown to the City’s future Capital Program for the next 10 years. The Concept Plan includes architectural concepts and recommendation for civic space improvements that will serve as a vision for future development or improvements within the downtown.

The concept plan does the following: