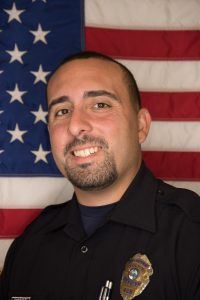 During the month of June 2019, the City of North Miami experienced an increase in criminal activity involving from Grand Theft-Auto to Robbery. Officer Kevin Crespo took the initiative to address the concern. Using his resources from the Miami-Dade Schools Police Department, Officer Crespo generated, organized, and maintained intelligence on juveniles from the North Miami Middle and Senior High Schools, that were committing violent crimes.

Between June and July of 2019, Officer Crespo worked tirelessly, utilizing internal resources such as detectives, hot sheets, and the Department's crime analyst to gather intelligence. This effort required Officer Crespo to painstakingly sift through countless police reports. As a result, he comprised a list of known juveniles, who were specifically known to commit violent crimes. On July 5, 2019, Officer Crespo facilitated the dissemination of this list department-wide and to surrounding police departments. The list was instrumental in identifying three robbery subjects, who were being investigated by North Miami Police Department (NMPD) detectives. Other robbery suspects on the list created by Officer Crespo, were later identified, clearing numerous cases out of North Miami Beach Police and the Miami-Dade Police Departments.

On July 8, 2019, while Officer Crespo was patrolling his assigned area, he made contact with a citizen, who was homeless and living in his vehicle. Officer Crespo, being familiar with different resources available for the homeless, directed and assisted the citizen to Chapman Partnership, a homeless shelter. Officer Crespo ensured that the citizen was provided with temporary shelter and given assistance to obtain employment in an effort to recover from his current state. Officer Crespo's actions made such a "Positive Impact", that the citizen called him "a gift from God", in an email message that was addressed to the Chief of Police, Larry Juriga. The aforementioned initiatives taken by Officer Crespo truly exemplify the North Miami Police Departments' motto, his dedication to the community, and his value to the City.