Debbie Wasserman Schultz has dedicated her public life to serving South Floridians and standing up for justice, equality, and opportunity wherever and whenever it is threatened. As Florida's first Jewish Congresswoman, she has earned the respect of her colleagues for working tirelessly on behalf of seniors, children, and families for nearly three decades. 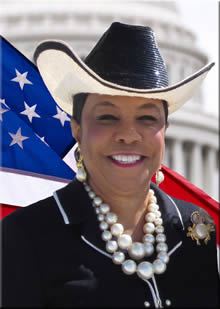 Congresswoman Frederica S Wilson proudly represents Florida's 24th Congressional District. She was overwhelmingly elected to a third term in the United States House of Representatives in November 2014. Congresswoman Wilson has been a 'Voice for the Voiceless' as:

Her tenure in Congress is marked by her signature spirit of advocacy for the less fortunate.

After earning a Bachelor of Science in Elementary Education from Fisk University and a Master of Science in Elementary Education from the University of Miami, Congresswoman Wilson worked as a teacher and assistant educational coordinator for the Head Start program in Miami Dade County Public Schools. She quickly rose to become principal of Skyway Elementary School which was recognized as one of the best schools in America in President George H. W Bush's "America 2000" plan to upgrade national education standards.

Congresswoman Wilson was confronted with the establishment of a composting plant directly across the street from Skyway during her time as principal of the school. She was able to mobilize the community and gather support to lobby the Dade County Commission to reverse an earlier decision to allow the plant which posed a serious health and environmental hazard to her students and the community.

Her battle against the plant was arduous and she was disappointed by the lack of support she received from school district and other local officials. As a result of her experience and seeing a need for more leadership, Congresswoman Wilson successfully campaigned for a seat on the Miami Dade County School Board in 1992.

Congresswoman Wilson's first legislative item as a school board member established the 500 Role Models of Excellence Project as a part of the school district's sanctioned programs. She recognized the impact of a positive male influence on the performance of boys when she was at Skyway. The program is now known as the 5000 Role Models of Excellence Project and has flourished for almost a quarter-of-a-century.

The 5000 Role Models of Excellence Project has awarded millions of dollars in college scholarships to help hundreds of young men achieve their dream of getting a college education. In 1997, the program was honored with the Teaching Example for the Nation Award by President Bill Clinton at the Summit for America's Future. The program serves more than 8,000 students each year.

She was elected to a seat in the Florida House of Representatives in 1998 and to the Florida Senate in 2002. She rose to become Senate Minority Leader Pro Tempore and Minority Whip, and was known as the "Conscience of the Senate" for her focus on improving life for low-income communities. She was an "effective" legislator and her major accomplishments include working with Governor Jeb Bush to remove the Confederate flag from the State Capitol, mandating HIV/AIDS testing for prisoners upon their release, opposing high-stakes testing, pushing for a ban of the term "illegal alien" in state public records, and partnering with Governor Charlie Crist to restore voting rights for ex-felons.

Largely due to her record of service to her community and her productive work as an elected official, Congresswoman Wilson was overwhelming elected to Congress in 2010. She made an immediate impact in Congress by continuing in her mission boost quality of life by:

She introduced the American Jobs Act of 2013 which is an innovative bill that promotes full employment and boosts workforce development opportunities. She introduced the Student Loan Borrower Bill of Rights which would provide vital relief to overburdened student loan borrowers, and the Youth Corp Act of 2013. She has also sponsored legislation to reduce homeowners' insurance premiums, protect foster children, and defend Haitian women against gender-based violence.

Congresswoman Wilson founded the Florida Ports Caucus in order to create a coalition across party lines to help pass the Water Resources Reform and Development Act. The bill was "stuck" in Congress for twelve years and its passage released billions of dollars in capital funding for major projects like the Port Miami tunnel and created thousands of jobs. The passage of the bill was remarkable because it had languished for years and it required bipartisan support in the Republican-controlled House.

She has been productive in securing resources for other projects in her district. In 2014, the Congresswoman helped secure a $1 million grant to help reduce crime in Miami-Dade County's highest crime area, the Northside District. The Department of Justice grant will bolster the Miami Dade Police Department's ability to combat crime and violence, and make the area a safer place to live, work, and raise a family. During her tenure, $3.1 billion in grants, contracts, and other assistance has been brought to Florida's 24th congressional district.

Congresswoman Wilson has worked tirelessly to recognize Americans who have made significant contributions to our nation. She ushered through legislation in record time to memorialize a new Federal Bureau of Investigation building in honor of Special Agents Benjamin P. Grogan and Jerry L. Dove, who were both killed in what is still the 'bloodiest shootout" in FBI History. She also passed legislation to rename a Miami post office in honor of Father Richard Marquess-Barry, who is a pillar of the community and in his retirement he remains one of the most influential and unifying faith-based leaders in South Florida.

Congresswoman Wilson understands Congress's role in global politics and she has taken up the fight for the return of the Nigerian schoolgirls since June 2014. She is one of the leading voices in the Twitter "#BringBackOurGirls" campaign. She has passed legislation and organized efforts in Congress to call for the girls' return and keep the issue at the forefront of international media. Her "Wear Red Wednesday's" and other endeavors have led the media outlets to call the campaign "Frederica Wilson's War," as an homage to "Charlie Wilson's War."

Committee on Education & the Workforce

Congresswoman Wilson is a Ranking Member of Committee on Education and the Workforce. She is proud to represent one of the most ethnically and culturally diverse congressional districts in the nation which includes parts of northwest Miami Dade and southern Broward counties. This includes all or parts of the cities of:

Born in Miami, Congresswoman Wilson learned the value of public service and community activism from her strong family foundation. Her parents, Beulah Finley and Thirlee Smith, Senior, were small business owners and civil rights activists. Her brother, the late Thirlee Smith, Jr, was the first full-time African American reporter at the Miami Herald and a long-time educator for Miami Dade County Public Schools who was responsible for implementing African American History into the district's curriculum.

Congresswoman Wilson is widowed and is the proud mother of three children - Nicole, Kesha, and Paul - and has five beautiful grandchildren.

Congresswoman Donna E. Shalala is proud to serve Florida's 27th District as an advocate for:

The longest-serving Secretary of Health and Human Services in U.S. history, she returns to Washington as the Representative for Florida's 27th District, which includes the city of Miami and surrounding municipalities in Miami-Dade County.

The granddaughter of immigrants from Lebanon, Congresswoman Shalala was born in Cleveland, Ohio. She received her A.B. from Western College for Women and her Ph.D. from Syracuse University. A distinguished educator, she served as President of Hunter College of the City University of New York, Chancellor of the University of Wisconsin-Madison, and President of the University of Miami. She is a member of the Council on Foreign Relations and has been elected to seven national academies, including the National Academy of Medicine, the American Academy of Arts and Sciences, and the National Academy of Education.

Congresswoman Shalala began her career in public service as one of the country's first Peace Corps volunteers in Iran. In 1977, President Jimmy Carter tapped her to serve as the Assistant Secretary for Policy Development and Research at the U.S. Department of Housing and Urban Development.

In 1993, Congresswoman Shalala was nominated by President Bill Clinton to serve as Secretary of Health and Human Services (HHS), where she created, implemented, and oversaw the Children's Health Insurance Program, currently covering over 7.6 million children. She also succeeded in doubling the budget of the National Institute of Health and secured the highest immunization rates in American history. At the end of her eight-year tenure at HHS, a Washington Post article described her as "one of the most successful government managers of modern times."

In 2007, President George W. Bush hand-picked her to co-chair with Senator Bob Dole the Commission on Care for Returning Wounded Warriors, tasked with evaluating how wounded service members transition from active duty to civilian life. In 2008, President Bush selected her as the recipient of the Presidential Medal of Freedom, the nation's highest civilian award.

Congresswoman Shalala has been named one of "America's Best Leaders" by U.S. News and World Report (2005), received the Nelson Mandela Award for Health and Human Rights (2010), was inducted into the National Woman's Hall of Fame (2011), and has more than five dozen honorary degrees.

Congresswoman Shalala is unapologetic in her love for South Florida's natural beauty, its rich culture, and its diverse people. She is honored to serve Florida's 27th District in the House of Representatives.