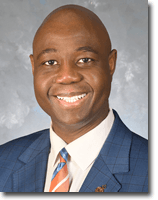 As your representative on the City Council, improving the quality of life for District 4 and all North Miami residents are my top priorities. As an educator, fostering community growth and working hard for the betterment of our community continues to be a vital initiative of mine.

It is a privilege to represent a community that embodies togetherness, people working together for the common good. Together, by working as one district, we are creating a new vision, a district 4 where we can rebuild the economic security of our working class families and Northwest 7th Avenue business sector.

With that in mind, increasing resident participation and civic engagement is a key component of my agenda, which is why my office incorporated an open-door policy. I want to hear your thoughts, ideas, and concerns about our community. I promise to work diligently on your behalf while dedicating all my resources to help make District 4 a better place for generations to come.

Thank you for taking the time to visit my website and learn more about me, my staff, and the issues we are addressing. Together, we can make our great city even better.

Mayor Alix Desulme believes that one of the most critical aspects of Public Service is giving back to the community. As a leader, he consistently advocates for residents in North Miami and South Florida. Mayor Desulme is a lifelong educator, small business owner and public servant. His experience in education includes working with at-risk youth, as well as Special Education and gifted students.

Mayor Desulme was first elected into office in 2009, in a city-wide election, making history as the first Black City Clerk of the City of North Miami. He held the distinction as the youngest and the first Haitian American elected City Clerk in the United States of America.

In 2015, he was elected to the North Miami City Council, representing District 4. The following year, he became the youngest Councilman to serve as Vice-Mayor and won his bid for re-election in May of 2019 with over 65% of the votes.

While serving as Vice Mayor, Mayor Desulme sponsored the recent, countless community-enrichment resolutions, with the goal of enhancing the quality of life for North Miami residents, including the Golden Silver Senior Program. The NOMI Golden Silver Senior program provides our young at heart residents a safe place to socialize, exercise, enjoy outings, and eat nutritional hot meals in a friendly environment, and thus improving their quality of life.

Mayor Alix Desulme is known as the "Peoples' Councilman." He created and implemented the first healthy eating initiative, “Let's Eat Healthy,” in the City of North Miami. This initiative ensures qualified residents receive fresh produce, dairy products, and other grocery items bi-monthly. On June 11, 2019, the North Miami City Council unanimously approved and allocated funding for The NoMi Food Market, which became the first governmental run food pantry in the State of Florida and is managed by the City’s Housing and Social Services Department. This partnership was made possible by the generous contributions of Feeding South Florida and the Florida Blue Foundation.

Additionally, Mayor Desulme fought and advocated for years for the creation of the City’s first Housing and Social Services Department. Since its inception on October 1, 2019, the Housing & Social Services Department’s mission has been to assist the City of North Miami in creating a viable urban community by providing decent housing and a suitable living environment, as well as overseeing programs and services that improve the well-being of individuals, families, and communities, principally for very low, low and moderate-income persons/families.

As an educator, Mayor Desulme has supported youth causes for over two decades, and is known for his dedication to the children of North Miami. He designed and developed NoMi Leaders in Training Program (L.I.T.). The L.I.T. program prepares the City’s next generation of public servants via higher education studies, career readiness, and an enhanced understanding of local civic processes. The L.I.T program also serves as a pre-requisite for students who reside in North Miami grades 9-12, to transition into the City’s signature Youth Opportunity Board (YOB) Summer Internship Program.

Currently, Mayor Desulme is an Adjunct Professor at St. Thomas University in Miami-Gardens, Florida, and an Educational Consultant for ELB Global, a California based organization. Mayor Desulme also holds a doctoral degree in Educational Leadership from the University of New England. His dissertation focused on Policies And Procedures Perceived By School Leaders To Reduce Truancy In A Public Charter School.